BIT is a test network of the Enecuum blockchain. With BIT, it is possible to test the Trinity protocol (a combination of PoA, PoS and PoW) as well as new functionality such as ETM (Enecuum Token Machine), delegation to PoS nodes (delegated smart staking), issuing and testing of different types of tokens - mining, NFT and other.

The network is created for public testing for Enecuum community members, partners and developers of decentralized applications. All new features developed by the Enecuum team will be publicly tested in the BIT network and then added to the main network.

Go to bit.enecuum.com, download the Android app, create a wallet and save your secret key. Of course, you can also create an account from your computer at bit-wallet.enecuum.com/login.

Transaction fees are introduced in BIT network, so you need to pay extra 0.01 BIT for every "write access" to the blockchain, like creating PoS-contract or claiming PoS-staking rewards. To pay these fees, you can get BIT coins from faucet-bit.enecuum.com (25 BIT once every 10 minutes per address).

After confirming PoS contract transaction and paying a transaction fee, please wait a bit. You will see a new record in the blockchain. Please find you contract at BIT PoS contracts page. If your PoS name is blank, you can find your contract by owner address. It should be the wallet you used to send PoS contract creation transaction. 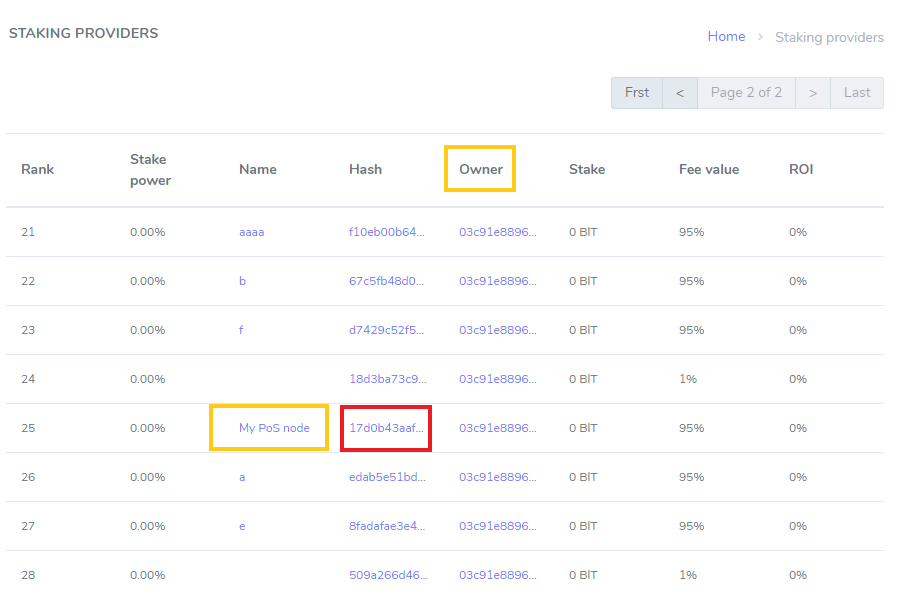 # Delegating to Your PoS Contract

There is a minimal self-delegated stake to be introduced later. But with initial release, no self-delegating is required. So, you can skip this step. Just create a PoS contract and run the node. But if you want to increase your rewards, you can delegate to you own PoS contract in the way any other delegation takes place.

Follow the PoS section of How to Mine Bit guide. Use the hash from the previous step as the POS_ID parameter.

At PoS contract page, you can find the amount of delegated coins and rewards that your contract receives. Please note that rewards shown in the Blockchain Explorer are split between PoS owner and its delegators according to your PoS fee value.