# General Principles of the Emission

The two phases of ENQ emission are presented below.

# Stage 2. Distribution of ENQ (after the main net launch) 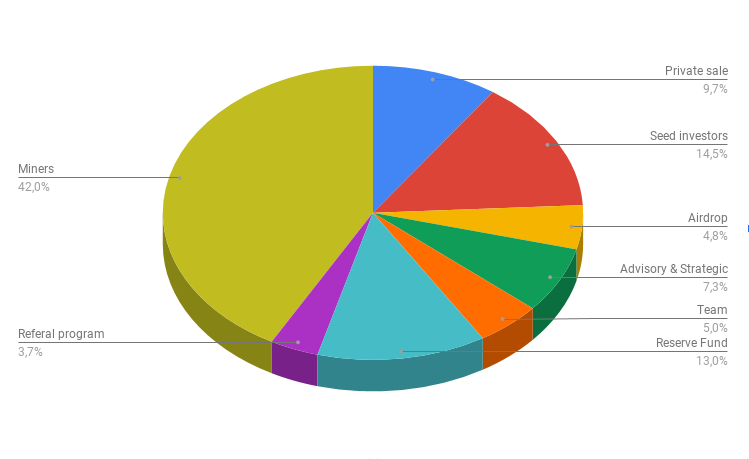 You can read the full report of the Stage 2 implementation in our official Medium article.

The total amount of ENQ available for mining and referral program rewards will be 160,119,436.25 ENQ.

ENQ data will be distributed within 25 years from the launch of the main network among PoW, PoS and PoA nodes, which will support the network and participate in the formation of a chain of blocks. Blocks will be created every 15 seconds.

Table of block generation and emission of new coins is presented below.

The total block reward will be 3.046 ENQ, which will be distributed among the network nodes as follows.

Distribution of rewards between network nodes over time is presented below.

The emission model and annual inflation for 25 years are presented below. 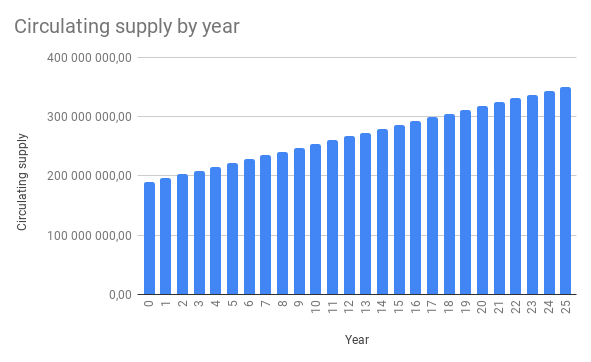 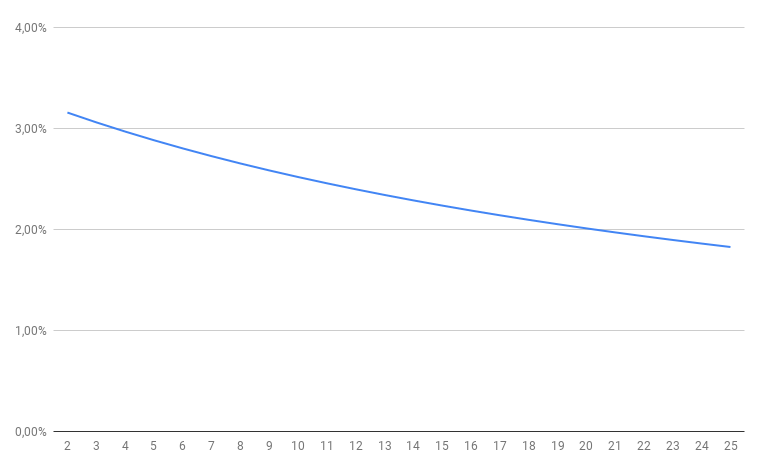 To participate in PoA mining, an active balance from 25 to 25,000.00 ENQ is required as well as a running PoA node with an ongoing Internet connection.

The total PoA reward is distributed among PoA publishers according to their stakes and the number of microblocks issued. Each PoA publisher receives a reward proportional to its stake in relation to the total stake of PoA publishers of the current block.

A predicted calculation can be done using the ROI calculator: pulse.enecuum.com/#!/roi

In order to become a PoS validator, a user needs to create a PoS contract with an ENQ balance high enough to be included in the "top 100" — the rating of PoS contracts with the highest stake value — with a minimum balance value of 25,001.00 ENQ. It is also necessary to start a server to participate in the creation of the chain of blocks. The PoS server should have constant connection to the Internet.

Any member of the network can become a delegator. To do this, at least 1 ENQ should be sent to a validator's PoS contract address. Sent funds will participate in the total stake and will receive a daily reward in ENQ. In this case, the delegator does not need to be in a constant Internet connection with the network.

Rewards for the block are calculated proportionally to the validator’s own stake and stakes received from delegators.

Each validator appoints a commission for self reward, which is charged automatically from the delegators. Commission can be from 0% to 100%.

Validators and delegators will also participate in the verification of transactions and will receive additional rewards from the system. The economics of this process are described here.

The operation of PoW nodes consists of finding a nonce value for a block to obtain a block hash with the required complexity. The RandomX algorithm is used for hashing. To start a PoW node, an Internet-connected server is required. The required complexity of the block grows with the number of nodes working in the network.

After the launch of the Enecuum main network, transaction fees payment will be introduced. The cost of the commission will be equal to 0.1 ENQ for both the native coin and for tokens issued over the protocol.

It is worth noting here that token issuers themselves determine user commissions in the issued tokens, while the issuer uses ENQ for a payment for Enecuum miners work.

Alice has released own Alice Token user token and has defined a user commission of 1 AT. This means that with every AT transfer Alice will receive 1 AT to her wallet. At this point, a commission of 0.1 ENQ will be automatically debited from the Alice Token address to pay for the miners work of adding the transaction to the blockchain.

All transactions in the Enecuum network are charged with a 0.1 ENQ fee. Fees for all transactions included into a block are summed up and distributed between network members that created this block — PoS leader and PoW, as well as between active PoS validators and genesis account according to the table.

The distribution will be as follows:

The distribution between PoS validators and delegators will occur in the same way as for the reward for mining blocks, that is, in proportion to their stakes and validators commission.